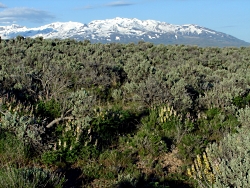 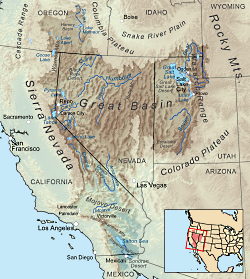 The Great Basin is aptly named.  Twice the size of Kansas, it stretches from the watersheds of the Columbia and Snake rivers south to that of the Colorado, and from the crests of the Sierra Nevada and southern Cascades eastward to the Wasatch front.  The Western explorer John Fremont coined its name in 1845.  The rivers and streams of the region that Fremont had seen all ended in sinks, marshes or lakes. None flowed to the Pacific Ocean.  He confirmed this on meeting Joseph Walker at Mountain Meadows in Utah.  Walker had traveled more of the basin’s western margins, dispelling  rumors of a river traversing the Sierra Nevada.  Precipitation that falls in the Great Basin stays in the Great Basin; water leaves only as vapor.  This is the hydrographic Great Basin.

How else to view the vast region between the Rockies and the Sierra Nevada? Geologists speak of the “Basin and Range Province”, so named for its valleys and the towering ranks of north-south mountain ranges that march across the landscapes of Nevada and edges of adjacent states. Unlike the upthrust Rockies and Sierra Nevada, Earth’s crust in the Great Basin appears to be spreading, to be pulling apart. The tilted escarpments of the Wasatch front are the easternmost evidence of this crustal deformation that has built the Basin and Range Province.

Botanists delimit the Great Basin by the hardy flora that clothes this rugged landscape. Great Basin plants tolerate freezing winters and parched summers, and in the valleys, soils of varying salinity.  The so-called Sagebrush Ocean fills many of the basins, as do other shrubs, such as shadscale and greasewood.  Upslope, these give way to juniper woodlands, often mixed with piñon pine.  This floristic Great Basin reaches eastward to central Utah and the Wasatch front, beyond which trees and other plants of the Rockies make their appearance.

The boundaries of all three concepts for the Great Basin — hydrographic, geologic and floristic — largely coincide.  Each recognizes the distinctive attributes of the Great Basin that set it apart from neighboring regions.  The Great Basin is readily recognizable to the trained eye, whether looking at satellite images, river courses, or the native plant communities encountered on a simple walk.

Frémont, John Charles. 1845. Report of the exploring expedition to the Rocky Mountains in the year 1842 and to Oregon and North California in the years 1843 – 44. Printed by order of the Senate of the United States , Gales & Seaton, 693 pages. –available as a Google eBook scanned from the original published book Grayson, Donald K. 1999. The desert’s past : a natural prehistory of the Great Basin. Smithsonian Institution Press, Washington D.C., 356 pages. –an exceptionally readable, thorough and authoritative overview of the Great Basin, with many maps, photographs and illustrations.http://books.google.com/books?id=W8ICAAAAMAAJ