At 3:00 a.m. on a frigid winter morning Nicki Frey, an Extension Associate Professor in the Department of Wildland Resources at USU, leads a group of new biologists who are trapping west of Bryce Canyon.

Cold, deep snow is all they can see on the valley floor.

The group is looking for the greater sage-grouse whose GPS transmitters are sending Frey signals – indicating they are nearby.

For best results, researchers trap sage-grouse on moonless nights. The only light they have comes from the ATVs and headlamps.

Frey explains, “Southern Utah is the farthest southern location where greater sage-grouse live in the U.S. This valley is part of their winter habitat.”

In disbelief, one biologist responds, “It would be impossible for grouse to winter here.”

The biologist’s statement is understandable, since research shows the winter habitat for greater sage-grouse is in areas where sagebrush is above the snow, so the grouse can hide underneath and receive protection from the brush and nutrition from its seeds.

Just as Frey begins to respond – 20 grouse burst out of the snow in front of them and fly away. “It scared us out of our skin.” Frey said.

“Everyone retreat! Everyone off of the snow!” Frey calls out.

Then she and her colleague Lisa Church, a biologist from Bureau of Land Management get down on their hands and knees and begin searching for where the grouse were hiding. They see wing marks in the snow and a hole close by. With the use of a flashlight, they look down the hole and discover the birds came from a cave under the snow-covered sagebrush.

Going against the grain, the grouse have been living under the deep snow.

Sagebrush in this area only grow 1.5 to 3 feet, and since the snow can get up to 12 feet it’s not far into winter before the sagebrush is completely covered.

Surprisingly, the grouse have been able to adapt.

Frey explains, “They make these little snow caves and eat the sagebrush leaves inside the cave until they’re gone, then they pop out and pop back into the next sage brush cave and eat the leaves in there.”

Buried sagebrush isn’t the only obstacle the southern grouse have had to adapt to.

Frey explains, “[In Northern Utah you have …nice rolling hills with lots of sage brush that seems to go on forever. In Southern Utah, we have little valleys of prime sage-grouse habitat, but they’re divided by rugged mountains and tree covered hills.”

This environment pushes the grouse to fly longer and further than they normally would.

They fly back and forth between the fragmented sagebrush habitats to find what they need to have a healthy population.

Having to constantly travel between these habitats takes a toll on the southern grouse.

This is an area Utah wildlife managers have helped the greater sage-grouse by removing pinyon-juniper forests which fragment their habitat.

According to Frey, “Anytime we [reconnect] habitat [in the southern region] the grouse use it immediately because they want to expand.”

The impact the Bureau of Land Management and Utah Division of Wildlife Resources projects have had on decreasing the forest barriers is astounding. “The numbers of sage-grouse have steadily increased every year.”

By using the research to assist with management planning, Utah can continue removing barriers for grouse survival and ensure their continued presence in our wildlands.

This is Shauna Leavitt for Wild About Utah. 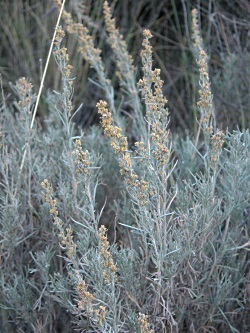 Three-tip sage (Artemisia tripartite) with visible yellow flowers. – Photo Courtesy and Copyright Dr. Leila Shultz
Zane Gray’s “Riders of the Purple Sage” and Steve Tremble’s “Sage Brush Ocean” are book titles that may invoke excitement from your literary past. Or you may be traveling along the interstates and side roads of our great state as monotony sets in and drowsiness tightens your grip on the wheel while you nod your way through endless miles of this seemingly drab landscape.

In science jargon it’s referred to as sage steppe, the dominant landscape throughout much of Utah and the Great Basin. Much of this maligned biotic community has been degraded or lost through various mismanagement practices. Sage Steppe is considered an endangered ecosystem despite the seemingly large area it inhabits, primarily due to fragmentation. And the iconic Gunnison sage grouse has followed its demise having recently been placed on the threatened species list.
I just returned from spending a day of study in the field with 16 college students running transects for the Grand Teton N.P. The park is spending millions in sage steppe restoration work to reclaim this critical plant community.

Sagebrush is an important member of an ecosystem that helps support many birds, reptiles, amphibians, and mammals, as well as an abundance of insects and microbes. One study found nearly 300 arthropod species directly living on just a few plants including- 72 spider, 237 insect, 42 of which were gall-forming, amongst many other species. Such diversity also indicates that sage is playing an important part in maintaining the health of the environment providing ecosystem services such as soil protection, water conservation and nutrient cycling.
Sage is well adapted to the demands of semi-arid deserts. It has tap roots that can go over 15 feet deep to suck up any ground water that might exist and forms extensive webs of surface roots in association with symbiotic fungal hyphae to efficiently gather any rain that might fall. Oftentimes, sagebrush grows in clonal communities with members that can live over 100 years!

Aromatic odors emanating from sage, especially following a downpour of rain, comes from a mix of chemicals including camphor, terpenoids, and a cocktail of other volatile compounds. Some of the chemicals have anti-herbivory action by killing the gut bacteria of carious browsers although pronghorn antelope seem to have evolved resistance to these toxins. Other browsers like cattle, sheep, and mule deer can only eat sagebrush in small doses or whan the leaves are young and tender.

It is this mixture of molecules that sagebrush produces which come into play for communication. Sagebrush is eaten by many mammals and insects. When sagebrush is browsed on by a pronghorn or grasshopper volatile compounds are released from the wound that warn other branches of the same sagebrush as well as the neighboring sage about the potential threat. The sagebrush in the area react to the warning by metabolizing toxins that make them taste unappealing and that cause digestive discomfort for future herbivores who try to make a meal of them.

Native Americans considered sage a sacred plant. It offered medicine, clothing, shelter, and was commonly used in their ceremonial sweat lodges. Last but not least, my lovely granddaughter was given the name Sage. So the next time you find yourself surrounded by our “sagebrush ocean” pay tribute to this vibrant and intricate community of life.

Jack Greene, a lover of sagebrush.

By late summer, most of Utah’s flowering plants have fizzled out for the year—those that remain are looking pretty spent. But not true for the sagebrush. It’s show time for over 20 types of sagebrush of the Intermountain West.

Like grasses and conifers, sagebrush plants are pollinated by the wind. They have no need for the specialized traits designed to attract live pollinators. Instead, they have evolved other strategies to survive and multiply.

For instance, wind-pollinated plants don’t need showy, colorful petals to attract insects or birds. The wind is going to do its job anyway regardless of visual cues. Thus sagebrush flowers are very small and nondescript. In fact, when passing by flowering sagebrush you might not even notice that it’s in bloom. Look for long spikes with clusters of tiny flower heads. The pale yellow flowers are concealed by petal-like bracts, which are the very same color as the rest of the plant.

While the flowers of sagebrush lack in beauty, they make up in quantity. A single flowering stem of the most common sagebrush—known simply as big sagebrush–can hold hundreds of flower heads that produce a massive amount of pollen. Most wind-blown pollen grains won’t end up anywhere near the female part of another plant. So to make up for this risky method of fertilization, individual plants must produce greater volumes of pollen. In contrast, plants with live pollinators get door to door service during fertilization. Far less pollen is needed to get the same job done.

Scent is another way for plants to attract live pollinators. Species pollinated by bees and flies have sweet scents, whereas those pollinated by beetles have strong musty, spicy, or fruity odors. However, the iconic western scent of the sagebrush has absolutely nothing to do with pollination. Instead, the pungent aroma of the sagebrush is a by-product of certain chemicals produced in the leaves. These chemicals evolved to repel animals and to reduce the odds of being eaten or grazed.

The chemicals—bitter terpenes, camphors and other secondary compounds–—peak in early spring. But as the late-summer flowering period approaches, the chemicals start to break down. By winter, browsers like deer and elk can nibble on the protein-rich seed heads without getting a nasty aftertaste.

Thanks to botanist Leila Shultz for sharing her knowledge of sagebrush. For a link to the online version of Leila’s book Pocket Guide to Sagebrush, go to www.wildaboututah.org
If you’d like a hard copy of this Pocket Guide, send an email to wildaboututah@gmail.com We have 5 copies to give away to listeners from across the state.

For Wild About Utah and the Quinney College of Natural Resources, I’m Holly Strand.

NOTE: The copies are gone. You can view the book as a .pdf here or check here for the next printing from http://www.sagestep.org/pubs/brushguide.html.

Hi, this is Mark Larese-Casanova from the Utah Master Naturalist Program at Utah State University Extension.

Anyone who lives in Utah knows that it’s a dry state. In fact, around three-quarters of our state is considered desert. A desert is often characterized as an area that receives less than ten inches of precipitation each year. But, high levels of evaporation, which are influenced by temperature, wind speed, and solar radiation, also contribute to creating a dry desert ecosystem.

So, how exactly are plants able to survive in Utah’s deserts, which are so dry? It turns out that the plants that grow and flourish in Utah’s deserts have an amazing array of adaptations for survival.

Many shrubs and trees, such as desert willow, and certain species of sagebrush and mesquite, have thick taproots that grow deep into the soil to reach groundwater. This helps the plants survive the hot, dry summer. Some mesquite taproots have been found to grow as deep as 200 feet to reach a constant water supply.

Cacti, such as the various types of prickly pear, have almost an opposite adaptation. They produce dense tufts of fibrous roots just below the surface of the soil. This allows cacti to quickly absorb water from brief rainstorms, and then store the water in their thick, succulent leaves.

As temperature increases, desert plants face the danger of excessive water loss from their leaves. A thick, waxy coating on the outside of leaves often helps to retain water. The shiny wax also reflects sunlight to keep the leaves relatively cooler. To further reduce leaf temperature and water loss, some plants, such as brittlebush, grow light-colored dense ‘hairs’ on their leaves and stems. These trichomes not only shade the plant, but also aid in absorbing water from morning dew.

If temperatures get too hot, and drought stress too great, some plants, such as creosote bush and ocotillo, may drop their leaves several times each year to ensure survival. Some of these plants have green chlorophyll in their stems so they can still produce food through photosynthesis when there are no leaves on the plant.

While this is just a sample of an amazing collection of adaptations, it’s clear that desert plants are champions of survival in a harsh ecosystem where water is so scarce.