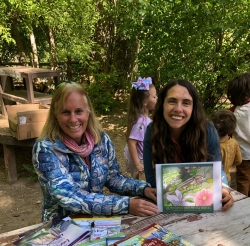 Author Melissa Marsted and Illustrator Liesl Cannon at the Stokes Nature Center Book Signing
Courtesy & © Mary HeersJust imagine waking from a very long sleep into a bright May morning in Cache Valley. This is the story of Luci, a western firefly, told charmingly by Melissa Marsted and illustrated by Liesl Cannon in their new children’s book, The Mystery of Luci’s Missing Lantern. After completing her transition from a larva to an adult firefly, Luci notices she has no light. She flies up Logan Canyon looking for her missing lantern, where the animals she meets encourage her to keep looking. But its a bluebird on top of Mt. Naomi, the highest point in the canyon, who turns Luci around and sends her back to where she was born, the Nibley Firefly Park.

There Luci finds her light. She sits down near the top of a tall blade of grass, and suddenly males fly by, flashing their lights, trying to get her attention. Luci discovers she can flash back. It’s a party – a big courtship dance.

You can see the story unfold if you visit the Nibley Firefly Park after dark. But please tread carefully. For fireflies, this is their Grand Finale. It has taken two years for them to grow from larvae to flying adults. Now they are choosing a mate. By July they will have laid their eggs in the nearby marshy ground and their life cycle will come to an end.

Any artificial light brought to the scene (such as flashlights and car headlights) seriously disrupts the courtship flashing. If you visit the Nibley Firefly Park this summer, please keep your light to the barest minimum, and – enjoy the party.

This is Mary Heers and I’m Wild About Utah

Hi, My name is Christy Bills, I am the entomologist at the Natural History Museum of Utah.

I am excited to talk about the Utah Firefly citizens science project. A lot of people are surprised to know that we have fireflies in Utah, but we actually have them in 20 of the 29 counties, that we’ve discovered so far. People are often surprised that they’re here, and they think that they’ve just arrived but they haven’t. They like to live in marshy areas, and they are only adults from late May to early July, so that’s why people often don’t see them, because people aren’t usually recreating in marshy areas.

The firefly citizens science project asks people to report when they see them to the museums website, and that allows us as researchers to know where they are so we can track their activity. We’ve been collecting data on them for 4 or 5 years and learning more about them over that time period.

I’ve actually gone through old newspapers that have been digitized online, and looked for any reference to fireflies or lightning bugs, and I have found zero reference dating back 100 years. However, when you actually talk to people in rural communities who have pastures and farms, it turns out anecdotally a lot of people know about them. This is a really wonderful way of people bridging the academic rural divide, and finding out that people in these communities have a wealth of knowledge that we can draw from, and they’ll say, “Oh yeah my grandpa always had them in the orchard,” or “We always knew that they were there,” so it turns out people always knew about them. Not a lot of people, but enough people.
People have anecdotes about knowing about them in urban areas, where there are clearly not anymore because of development and light pollution. That helps us also know what factors make them go away.

More information about the project is available, at NHMU.UTAH.EDU/fireflies.

Lloyd, James E., 1964. Notes on Flash Communication in the Firefly Pyractomena dispersa (Coleoptera: Lampyridae) Annals of the Entomological Society of America, Volume 57, Number 2, March 1964 , pp. 260-261. (James Lloyd is a leading authority on fireflies. He retired from academic duty at the University of FL, but here is a web page with some of his wisdom and musings. http://entnemdept.ufl.edu/lloyd/firefly/

Phys.org news service. Jun 26, 2012. Romancing the firefly: New insights into what goes on when the lights go off. http://phys.org/news/2012-06-romancing-firefly-insights.html#inlRlv

Most people are fascinated by unusual displays of light. Meteor showers, solar eclipses, and the stunning Aurora Borealis, or Northern Lights, are grandiose in scale and mesmerize onlookers. But people are also enchanted with the small life-forms that create their own light.

Bioluminescence, the production of light by living creatures, is an incredible phenomenon produced by certain mushrooms, scorpions, millipedes, bacteria, snails, worms, beetles, and nearly half of marine life including single-celled plankton, jellyfish, octopi, and fish. Some are also fluorescent by absorbing light rays and then emitting them as a different color.

But today we will focus on fireflies, also known as lightning bugs, which are actually beetles.

How, and why, do these creatures produce their own light? Scientists are still learning how the process works, but basically it is a chemical reaction involving luciferin, a light-emitting compound, being catalyzed by an enzyme and reacting with oxygen to release cool, light photons.

The “why” part is primarily for locating mates. But other species could also use it to lure prey, as a method of escape, and to warn predators.

The nighttime hours of late Spring and early Summer months are prime time for firefly activity. They live around wetland areas where the soil is moist and will start flashing when the sky is dark. Females remain fairly stationary atop tall grass and watch for males who fly around flashing various light signals. When a female approves of a suitor’s signal, she will respond with her own glow pattern which allows the male to find her. After mating, the female will lay eggs in the moist soil or leaf litter where they won’t dry out. The eggs usually hatch in 3-4 weeks.

While we enjoy seeing these insect “shooting stars” it is critical to avoid trying to capture them since the Utah populations are small and fragile. (Photos are available online on many websites if one needs to see them closeup.) Walking on the soil can kill the eggs or larvae, and light from automobiles, street lights and flashlights can disrupt their ability to see the flashing of their prospective mates. While the “Firefly Citizen-Science Project” from the Natural History Museum of Utah indicates sightings at more than 50 locations, careless actions, as well as loss of critical habitat, are actually causing a decrease in populations across the country.

Let’s do our best to be good stewards of the earth and only “observe” the amazing firefly.

This is Ron Helstern with Wild About Utah.

24 June 2017
Today while waiting for local city fire works we saw a lighting bug or two. We are in West Haven.

One of my greatest delights during childhood was to visit my grandmother in North Carolina. For around her farmhouse I could spend endless hours chasing and catching fireflies–we called them lightening bugs back then. As an adult, I am still captivated by the dancing lights that animate the muggy darkness, often with a background chorus of crickets and cicadas.

Flashing in fireflies evolved as a way to identify a mate. The male flashes his invitation while patrolling the local air space. If a female is impressed, she responds, either from the ground or at some perch in a shrub or on tall grass. Different species emit different flash patterns to avoid interspecific mix-ups.

Fireflies are very common in the moister, eastern half of the US. Look for them near ponds, streams, wet meadows and marshes. Many popular science sources will assert that fireflies don’t occur in the arid west. Or they will say that fireflies in the west don’t flash. For while the larvae of all firefly species glow, the adult forms of some species don’t flash. And those non-flashing forms are the species which are documented online and in collections for Utah and surrounding states.

Until recently I felt sorry that Utah kids don’t get to experience these magical bioluminescent displays. But on Monday night just before 10 PM, my family and I stood at the end of the sidewalk behind the soccer fields in Nibley’s Heritage Park. As the sky darkened, tiny amber lights began to wink on and off. An entire field of twinkling lights lay before us. I had to pinch myself to make sure I wasn’t dreaming.

I asked around and discovered that –in the last 10 years or so–there have been several sightings of flashing fireflies here in Utah. In 2002, biologist Jim Cane discovered some in River Heights. Utah State University’s Insect Collection features a 2007 specimen from Heber Valley. In recent years, additional sightings have been reported in Escalante, the Uinta, Spanish Fork and now Nibley.

We don’t know why Utahns are now able to enjoy these insect light displays. Have the flashing fireflies always been here and we just didn’t notice them? Did we notice them, but didn’t document it publicly? Or is the range of this particular species expanding? And if so, why?

To see the Nibley fireflies check our website www.wildaboututah.org. We’ve posted a map. And if you have seen flashing fireflies now or in the recent past here in Utah, let us know and we’ll post it on our website for others who might be nearby.

In general, firefly populations are declining around the world, and they are obviously still rare here. So if you run across them, treat them with respect!

22 June 2013
I just read the article about fireflies and want to say I’ve seen them in Mill Creek Canyon, just out of Moab (not Mill Canyon, which is north of town). I’m familiar with them from being in Missouri as a kid on vacation to see relatives.

24 June 2017
Today while waiting for local city fire works we saw a lighting bug or two. We are in West Haven.

Lloyd, James E., 1964. Notes on Flash Communication in the Firefly Pyractomena dispersa (Coleoptera: Lampyridae) Annals of the Entomological Society of America, Volume 57, Number 2, March 1964 , pp. 260-261. (James Lloyd is a leading authority on fireflies. He retired from academic duty at the University of FL, but here is a web page with some of his wisdom and musings. http://entnemdept.ufl.edu/lloyd/firefly/

Phys.org news service. Jun 26, 2012. Romancing the firefly: New insights into what goes on when the lights go off. http://phys.org/news/2012-06-romancing-firefly-insights.html#inlRlv