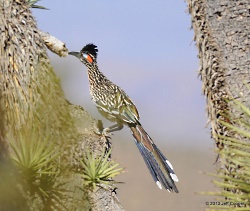 Roadrunner on Joshua Tree
Geococcyx californianus
Beaver Dam Slope, Washington County, UT
Courtesy & Copyright 2013 Jeff Cooper
Neovistabirding.blogspot.com
“A roadrunner up in a tree? Couldn’t be!” was the comment I got upon describing this unusual sighting to some BLM employees in St. George, Utah. But sure enough, there it was, most likely a juvenile trying out it’s new wings as it’s lesser siblings scrambled through the desert scrub near a wet hollow. I too was amazed to see this quirky bird in a tree, but then stories I had accumulated from those who have lived in roadrunner territory bore testimony to its strange ways.

Their ungainly and rather comical appearance, combined with their eccentricities, have endeared them to many, and find myself no exception. And yes, as you have heard, they are very quick on their feet attaining sustained ground speeds of 17 MPH, not quite as fast as Canis Latrans, the wily coyote. Another peculiarity- for whatever reason, they have a propensity for running into buildings, perhaps hoping to corner their prey.

A member of the cuckoo family, the Roadrunner is uniquely suited to the hot desert environment found in southern Utah. This is because of a number of physiological and behavioral adaptations. Its carnivorous habits offer it a large supply of very moist food. It reabsorbs water from its feces before excretion. A nasal gland eliminates excess salt instead of using the urinary tract like most birds. An it reduces its activity 50% during the heat of midday.

Its extreme quickness allows the roadrunner to snatch a humming bird or dragonfly from midair. Snakes, including rattlers, are another favorite food. Using its wings like a matador’s cape, a roadrunner snaps up a coiled rattlesnake by the tail, cracks it like a whip and repeatedly slams its head against the ground until lifeless. It then swallows its prey whole, but is often unable to swallow the entire length at one time. This does not stop the Roadrunner from its normal routine. It will continue to meander about with the snake dangling from its mouth, consuming another inch or two as the snake slowly digests.

I can scarcely wait for my next encounter with the roadrunner!