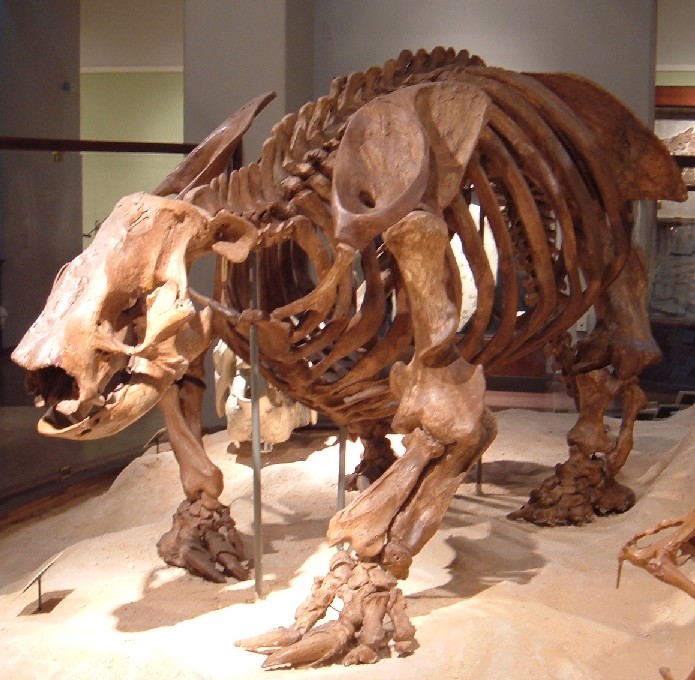 Hi, I’m Ru Mahoney with Stokes Nature Center in Logan Canyon. As winter approaches I find myself anticipating the first really good snow, when our valley floors and mountain passes will be transformed overnight, relinquishing autumn’s riot of color for a glacial monochrome. As little as 12,000 years ago winter white was Utah’s perennial favorite, donned at the launch of the Pleistocene Epoch, a roughly 2 million year long period (give or take 10,000 years) marked by widely recurring glaciations.

The west has a reputation for being vast, but Ice Age Utah was even bigger. The mountains where higher and sharper. And the Great Salt Lake was submerged beneath the glacial waters of Lake Bonneville. At its largest, this massive body of water covered 20,000 square miles and was more than 980 feet deep. To put that into perspective, that measures about 9.5 million football fields wide by 4.5 Salt Lake Temples deep. And the Ice Age wildlife? Well it was much more akin to an African safari than anything you’re likely to find on your favorite shoreline trail these days.

The megafauna of Pleistocene Utah included a menagerie of beasts that are the stuff of legend. Familiar species like bison and big-horn sheep grazed among herds of mammoths and mastodons. Camels and horses – destined for extinction in North America – were the prehistoric prey of dire wolves and saber-toothed cats. Giant ground sloths the size of modern day elephants stood on two powerful hind legs to browse on shoreline foliage. And herds of muskoxen kept a wary eye on Arctodus, the Short-faced bear, a formidable predator more than 50% larger than any bear species living today.

The last 30,000 years of Utah’s Ice Age were characterized by increasingly volatile shifts in climate. The changing norms in temperature and abundance of liquid water created cyclical periods of transitioning habitat. Forests and forest dwellers gave way to deserts and their specialist species, before shifting back to forests again, all in mere millennia. While nomadic and highly adaptable species like muskoxen eventually moved north to more stable climates, the less adaptable fauna of the Ice Age were increasingly relegated to sharing shoreline habitat diminished by the swollen banks of Lake Bonneville.

As fluctuating glaciers pushed southward and then retreated, canyons like Big and Little Cottonwood were gouged into existence. Spring and summer glacier melt carried an abundance of freshwater into the lake, sometimes sweeping along with it the remains of prehistoric animals that had not lasted through the winter, laying them to rest in shoreline deltas where their fossilized remains are now uncovered and studied in alluvial sediment. For many of Utah’s Ice Age animals, the end of the Pleistocene brought extinction.

Today the ancient shoreline of Lake Bonneville is one of the most distinguishable geological features along the Wasatch front. This “bench”, as it’s now commonly known, is easily identifiable in cities all along the Wasatch and frequently boasts fine homes and even finer views. Which might go to show that lakeside property retains its value whether the lake is still there or not. So as you enjoy a winter hike or cross country ski along a shoreline trail this season, think about Utah’s last Ice Age and how our rich fossil record, with some of earth’s largest land mammals, paints a picture of an even wilder west.