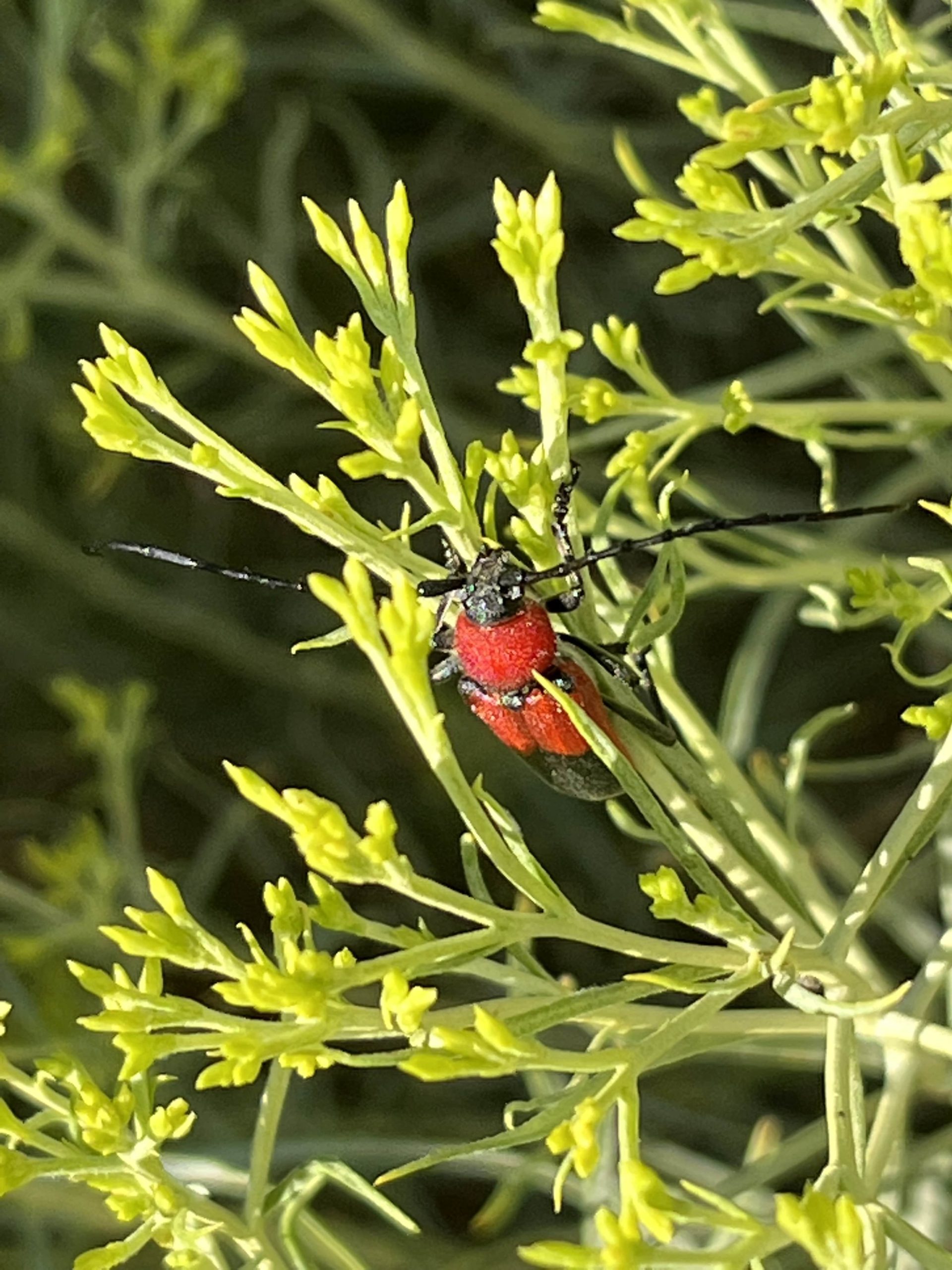 A Childs Sawyer Beetle in Her Naturalist Journal
Courtesy & © Shannon Rhodes, PhotographerBefore E. B. White set about crafting Charlotte’s Web in 1949, according to Melissa Sweet’s biography Some Writer, he was “bringing a pail of slops to the barn” that he loved in Maine and thinking about a time not long before when he observed a barn spider spinning her egg sac and depositing her eggs. Weeks later, when he had brought the egg sac in a candy box to New York City, he found hundreds of spiderlings emerging and realized a story emerging as well. Michael Sims, author of The Story of Charlotte’s Web, quotes from a letter White wrote to some schoolchildren: “I didn’t like spiders at first, but then I began watching one of them, and soon saw what a wonderful creature she was and what a skillful weaver. I named her Charlotte.” E. B. White went to Willis J. Gertsch, author of American Spiders and expert at the American Museum of Natural History’s Department of Insects and Spiders, to learn. He spent a year studying spiders in order to get the story just right.
Face to Face with a Longhorned Beetle
In northern Utah last week I made a friend who happened to be a white-spotted sawyer beetle named Monochamus scutellatus. My children and I have been fascinated by these insects for years. If you are the most apprehensive and skittish adventurer in your group, chances are that this relatively large forest insect will glide in, land on you, and courageously stay, as if it had something to say. Like E. B. White and the orb weaver Aranea cavatica, this longhorned beetle and I had a face-to-face chat. What you will notice immediately are his long horns. These antennae were twice as long as the rest of his body, and that’s how you would know he was a male. The antennae of the females, in contrast, are typically only half as long. Both male and female have a distinctive white dot at the base of the wings, an easy way to distinguish them from the invasive Asian longhorned or velvet longhorned varieties.

This white-spotted sawyer said he is often misunderstood because of his appearance. He can’t help looking a bit creepy. He also sometimes gets blamed for damaging forests and wanted to set the record straight. He said that as a grub, he fed on the sapwood of evergreen trees that are already dead or nearing it. In fact, sawyer beetles invade trees following forest fires and in the months following mountain pine beetle attacks. They do not, however, kill healthy thriving trees. Sawyer beetles are, though, responsible for the familiar teeth-grinding sounds one hears in a wooded area as the fleshy larvae scrape with their mandibles.

At the other end of Utah perched in Monticello’s rabbitbrush a few days ago, I met a colony of striking Crossidius coralinus. Instead of mostly black bodies, these longhorn beetles boast vibrant reds and many more stories to tell. Thanks to beetle entomologist Ted MacRae, I am able to understand those stories better. I must admit that I will probably still jump when a longhorned beetle initiates a conversation from my forearm, but I now appreciate its point of view. After all, Charles Darwin suggested that “a taste for collecting beetles is some indication of future success in life,” and I will take all the help I can get.

For Wild About Utah, I am Shannon Rhodes.