As the mountains begin to take on hues of scarlet, gold and russet, many Utahns might be looking eagerly toward the coming months when those slopes will be blanketed in white. The Utah ski industry nurtures a whopping annual income of about $800 million dollars. It’s no surprise, therefore, that the state claims to have the “greatest snow on earth.” In fact, the state of Utah managed to make their slogan a federal trademark in 1995 after winning a lawsuit brought by the Ringling Brothers and Barnum & Bailey circus group, who felt the catchy marketing phrase might be confused with their slogan, the Greatest Show on Earth.

The trademark must have worked, because Utah draws so many visitors to its slopes, it racks up about 4 million skier days annually. But disregard plenty of evidence that we do indeed draw a crowd, and the statement is pretty subjective. So what’s the science behind our legendary powder?

The ideal condition skiers hope for is a deep, fluffy snow that creates the illusion of bottomless powder. And finding it is a bit like the Goldilocks story. Too wet, and you bog down. Too dry, and there’s not enough body to create a floating sensation beneath the ski. If the terrain is too steep, the powder won’t stick. And if it’s not steep enough, you can’t build sufficient momentum to glide over the top.

To get to the bottom of why Utah’s snow is just right, we actually have to look even further westward, toward the slow warm waters of the North Pacific current. As water laden clouds move inland, snow first falls over the Cascades in the north and the Sierra Nevadas further south, with an average moisture content of 12%. Even in areas like Washington’s Mt. Baker, where annual snowfall comes in greater quantities than Utah, the moister maritime snow creates a heavy base that bogs down skis. By the time these winter storms cross the Great Basin and reach the skiers’ Mecca of Alta and the Wasatch Range, the moisture content will have decreased to about 8.5%. And that seems to be the sweet spot. The moisture content of Utah’s intermountain snow is just enough that powder from our first storms settles into a soft but voluminous base. As winter progresses, fresh snow falls in a cold and mostly arid environment, forming very fine, symmetrical crystals called dendrites. The microscopic structure of dendrites allows them to accumulate in well ventilated, incompact drifts, much like the puffy down in your favorite pillow or ski jacket.

And perfect powder isn’t the only advantage Utah’s ski resorts have over their neighbors. Our mountainous topography, with its wealth of winding canyons, means we have an abundance of slopes well protected from strong winds which could compact or carry away fresh snowfall. And while so many cold and overcast days might get you down, it also protects our top powder from radiation and air mass effect, which can create a crust along the surface. And that means our freshly fallen powder sticks around for longer.

So consider that Utah offers 26,000 acres of mountain, blanketed in more than 500 annual inches of perfect intermountain snow, and it’s no wonder we enjoy 5 times the number of “powder days” as our neighbors. “The Greatest Snow on Earth” starts sounding a lot less subjective, and more like truth. In fact, you just might be tempted to make like Goldilocks and make yourself at home.

By late summer, most of Utah’s flowering plants have fizzled out for the year—those that remain are looking pretty spent. But not true for the sagebrush. It’s show time for over 20 types of sagebrush of the Intermountain West.

Like grasses and conifers, sagebrush plants are pollinated by the wind. They have no need for the specialized traits designed to attract live pollinators. Instead, they have evolved other strategies to survive and multiply.

For instance, wind-pollinated plants don’t need showy, colorful petals to attract insects or birds. The wind is going to do its job anyway regardless of visual cues. Thus sagebrush flowers are very small and nondescript. In fact, when passing by flowering sagebrush you might not even notice that it’s in bloom. Look for long spikes with clusters of tiny flower heads. The pale yellow flowers are concealed by petal-like bracts, which are the very same color as the rest of the plant.

While the flowers of sagebrush lack in beauty, they make up in quantity. A single flowering stem of the most common sagebrush—known simply as big sagebrush–can hold hundreds of flower heads that produce a massive amount of pollen. Most wind-blown pollen grains won’t end up anywhere near the female part of another plant. So to make up for this risky method of fertilization, individual plants must produce greater volumes of pollen. In contrast, plants with live pollinators get door to door service during fertilization. Far less pollen is needed to get the same job done.

Scent is another way for plants to attract live pollinators. Species pollinated by bees and flies have sweet scents, whereas those pollinated by beetles have strong musty, spicy, or fruity odors. However, the iconic western scent of the sagebrush has absolutely nothing to do with pollination. Instead, the pungent aroma of the sagebrush is a by-product of certain chemicals produced in the leaves. These chemicals evolved to repel animals and to reduce the odds of being eaten or grazed.

The chemicals—bitter terpenes, camphors and other secondary compounds–—peak in early spring. But as the late-summer flowering period approaches, the chemicals start to break down. By winter, browsers like deer and elk can nibble on the protein-rich seed heads without getting a nasty aftertaste.

Thanks to botanist Leila Shultz for sharing her knowledge of sagebrush. For a link to the online version of Leila’s book Pocket Guide to Sagebrush, go to www.wildaboututah.org
If you’d like a hard copy of this Pocket Guide, send an email to wildaboututah@gmail.com We have 5 copies to give away to listeners from across the state.

For Wild About Utah and the Quinney College of Natural Resources, I’m Holly Strand.

NOTE: The copies are gone. You can view the book as a .pdf here or check here for the next printing from http://www.sagestep.org/pubs/brushguide.html.

American paleontologist Roy Chapman Andrews was a frequent visitor to the Gobi Desert. This is how he described being caught in a Gobi desert dust storm: “Seemingly a raging devil stood beside my head with buckets of sand, ready to dash them into my face…” “…after each raging attack it would draw off for a few moments’ rest. Then suddenly the storm devil was on us again, clawing, striking, ripping, seeming to roar in fury that any of the tents still stood.”

Andrews didn’t have to go so far to feel the rage of a dust storm. He could have come to western Utah. While we don’t have the monstrous storms of the Sahara and the Gobi/Manchurian deserts, the eastern Great Basin–which is essentially western Utah–sits secure on any global list of dust storm hotspots.

Let’s consider why this is so…

First and foremost, western Utah has the dust. In scientific terms, dust is any particle—organic or inorganic—that is less than .63 microns or smaller in diameter. .63 microns is about half the width of a single human hair. In geological terms think silt or clay particles. A grain of sand is much larger. If you are the size of a dust particle, then a relatively small puff of wind will release you into the air. And you’ll stay there until it’s completely calm or rain forces you down.

A great place to find geologic dust is in desert playas. For runoff sediments collect in these dry lake depressions. Western Utah has several of these desert dust bins. And satellite data have confirmed that playas such as Sevier Dry Lake, Tule Dry Lake, and Great Salt Lake Desert are major sources of dust plumes. The alluvial fans of the Great Basin mountains provide an additional source of dust.

To get this dust airborne you need wind which is also plentiful in western Utah. This region typically experiences strong south and southerwesterly winds called “hatu winds.” That’s Utah spelled backwards. The name was coined by colorful Utah meteorologist Mark Eubank. These hatu winds blow south to north or to the northwest. They pick up speed and dust as they race along the north-south trending Great Basin ridges. They can reach speeds of over 90 miles per hour.

Utah’s hatu winds peak in the spring months with a secondary peak in August-September. In spring these windy freight trains full of dust can hit the populated Wasatch Front wreaking havoc with air quality and human health.

Sometimes raindrops capture dust in the airstream and splat them onto our windshields and windows. These mud rains are most common in spring when the hatus are at their peak. And this is why saavy Utahns never bother washing their home windows until June.

While dust storms can be considered natural events, the fact that they are increasing in number and severity is definitely unnatural. The increase is caused by human-related activities that remove vegetation or break the biological soil crusts that help stabilize dust and soil. Overgrazing, water withdrawals, military operations, farming on marginal lands, off-road vehicle riding, fires, even restoration activities all release dust to be carried off by the next significant wind.

Thanks to Atmospheric Scientist Maura Hahnenberger for her help with this Wild About Utah story.

For Wild About Utah, and the Quinney College of Natural Resources, I’m Holly Strand.

Hahnenberger, M. and K. Nicoll. Geomorphic and land use characteristics of dust sources in the eastern Great Basin of Utah, U.S.A. Accepted Geomorphology. 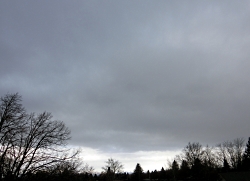 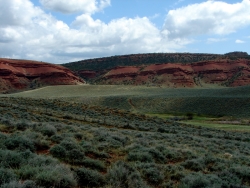 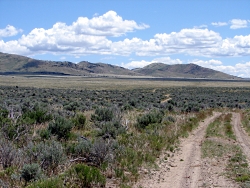 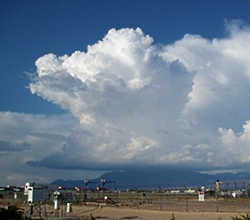 Cumulonimbus
A dense cloud that grows upward, looks like a cauliflower, anvil, or tower, and usually has lightning, thunder, and rain.
Courtesy NOAA

Who has not indulged in the idle pastime of watching puffy white clouds pass overhead, naming their shapes as they form? Of course, such whimsical names do not serve comparative description and understanding. For this, a lexicon of clouds is needed. Our formal cloud classification system traces back to 1803, when an Englishman, Luke Howard, published “An essay on the modifications of clouds”. Luke Howard owned a profitable pharmaceutical company, which funded his gentlemanly meteorological pursuits. Mr. Howard wisely chose a Latin cloud vocabulary to name and illustrate three fundamental cloud types.

Howard dubbed a type of lower elevation cloud cumulus, meaning mass or heap. These grow from mere puffs to big flat-bottomed clouds with white cauliflower tops. For sheer meteorological beauty, nothing beats legions of fair weather cumulus scudding across a bluebird sky atop a montane backdrop.

The lowest cloud form is stratus. Forming below 8000 feet, they appear as an extensive deck of unbroken gray. Stratus clouds often bring Utah’s winter snowstorms and spring rains. Nimbostratus are responsible for Seattle and Portland’s endless winter drizzle. In contrast, our Utah summer rains fall from towering cumulonimbus thunder heads. These ominous clouds are powered by hot summer updrafts and the steamy humidity that flows northward with the North American monsoon.

Luke Howard’s cloud-naming convention includes 10 principal types in all which easily lend themselves to naming combinations. You can now envision the height and appearance of cirrocumulus clouds, for instance. Cirrus, cumulus, stratus, nimbus, the cloud lexicon of amateur meteorologist Luke Howard has endured for over 200 years. Pictures of these cloud types with a link to the pages of Howard’s original published treatise can be found at our Wild About Utah website.

Luke Howard. 1803. “Essay on the modifications of clouds by “3rd ed. Published 1865 by John Churchill & Sons in London .
https://archive.org/details/essayonmodifica00howagoog and
http://books.google.com/books?id=7BbPAAAAMAAJ&printsec=frontcover#v=onepage&q&f=false