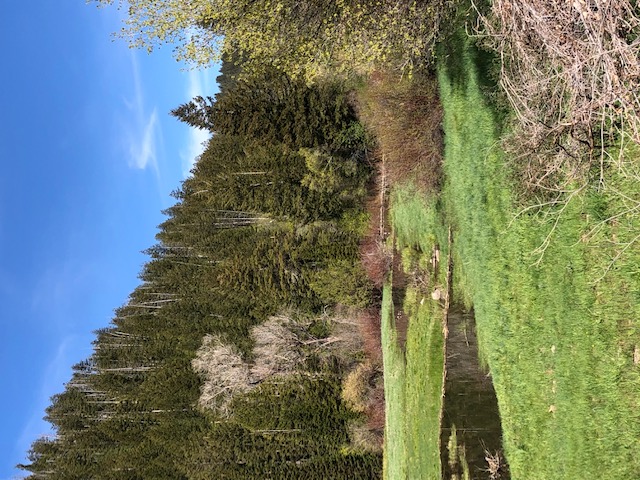 Cascading Reservoirs created by beaver activity on Birch Creek above the Wilde ranch near Preston, ID
Courtesy & © Mary Heers, PhotographerWhen Jay Wilde graduated from Preston High School in 1963, he took off to see the world. Thirty years later he came back, bought out his siblings, and moved into the family homestead in the hills above Preston, Idaho. He had acres of pasture and two hundred mother cows. But one thing was missing. Water. Birch Creek, which had run year round when he was growing up, now dried up in June. Hiking up to the headwaters, past his deeded property and into the National Forest, Jay found something else was missing. There was no sign of the beavers he remembered seeing there in his childhood. Now there were no beaver dams to slow down the flow of melting snow, and rainfall, spread it out into tiny reservoirs, and most importantly, no way to allow the surface runoff to filter down into the ground water.

On his own dime, Jay got some beavers and released them in the mountain headwaters of Birch Creek. Nothing happened. A year passed. The beavers were gone.

But help was on the way.

Enter Joe Wheaton, a beaver specialist at Utah State University. Joe bought a truckload of poles and recruited some student volunteers. Up the canyon they went, pounding poles into the streambed and weaving a few branches between the poles. Hopefully these structures would become “kick starter dams” for the next try at releasing beavers.

In 2015 five beavers were released. The beavers took one look at the kick starter dams and decided these dams suited them fine. They moved in and went to work.

After a few years, Jay and Joe checked the beaver’s progress. They found a thriving beaver community, and counted over 12 dams. The beavers seemed to be marching to Joe’s mantra for controlling spring runoff: “Slow it. Spread it. Stow it.”

And now, for the latest update to this story.

Earlier this month I was allowed to tag along with Jay and Joe and two others as they tramped up to the headwaters of Birch Creek. We found a watery paradise. Melting snow was trickling over and around the dams, cascading down into deep pools, and spreading out into lush green meadows. There were too many dams to count, but Joe said over 200. Jay smiled and said down below Birch Creek was running 40 more days.

And I – I just burst into song!

This is Mary Heers, and I’m Wild About Utah.