You may think of “the old grind” as your workweek, but from a dietary perspective, the old grind links your holiday turkey with dinosaurs. Before making gravy this Thanksgiving, find the densely muscular organ amid your turkey’s giblets. This is the turkey’s gizzard which preceded the living bird’s intestine. In its tough-walled gizzard, a bird mechanically breaks down hard or tough foodstuffs like we mammals use our molars. Reducing chunks to crumbs gives digestive enzymes the large surface areas needed to efficiently digest food.

Being toothless, birds must swallow most nuts, seeds, bugs and mollusks whole. In the gizzard, these items are churned, crushed and ground up, aided by ingested sand, grit or small stones called “gastroliths”. A turkey’s gizzard squeezes with twice the force of our own jaws. At 400 pounds per square inch, this force shatters acorns and even hickory nuts. The gizzard works like the ball mills used in mining, wherein heavy rotating iron drums loaded with steel balls pulverize rock ore. Like a gem tumbler, though, the gizzard eventually smooths and polishes its gastroliths. Having thus lost their utility, these stony gastroliths are regurgitated.

Gastroliths did not originate with birds, END_OF_DOCUMENT_TOKEN_TO_BE_REPLACED 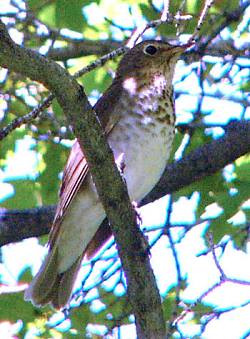 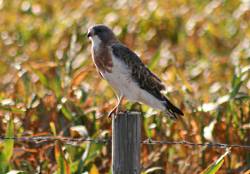 Both Swainson’s Thrush and Swainson’s Hawk are named after the 17th century self-taught British naturalist, William Swainson. He was a contemporary of John James Audubon. Like Audubon, Swainson was a passionate solo collector, taxidermist and skilled illustrator of birds. Unlike Audubon, Swainson’s single intensive field expedition took him far to the south, sailing to eastern Brazil. During his two year stay, he amassed a collection of 20,000 animal specimens, including 760 bird skins. Swainson ultimately named 20 species new to science. Although he never visited North America, he nonetheless co-authored an encyclopedic four volume treatise about North America’s fauna.

Swainson’s Hawk and Swainson’s Thrush share another similarity, this one biological. Both birds migrate long distances to escape winter’s cold and hunger. Swainson’s Thrush winters in balmy tropical forests of South America. Swainson’s Hawk soars farther, all the way to the arid Argentine pampas. There this large slender hawk dines mostly on big flying insects, particularly grasshoppers and even dragonflies. Swainson’s Hawks migrate in groups, often along regular corridors. Every September, Hawkwatch volunteers and hardy birders have reported hundreds of Swainson’s Hawks rocketing past the Wellsville Mountains of northern Utah, flying amid several thousand migrating raptors of all kinds.

Birds migrate to avoid the snow, cold and lean times of northern winters. Migration poses natural risks, of course. Hawkwatch ornithologists also suspect that widespread use of two deadly organophosphate insecticides on Argentine crops kills many insect-eating Swainson’s Hawks. The plow, pavement and subdivisions have also reduced this hawk’s historic northern range, especially in California. In addition, foolish people still shoot this relatively tame hawk, not caring that its diet of rodents and grasshoppers benefits our farmers and ranchers.

Professional disappointments drove the quarrelsome William Swainson south as well, to New Zealand, where he died in anonymity. His namesakes, Swainson’s Hawk and Swainson’s Thrush, live on to cross and recross the equator in pursuit of perpetual summer and the feast it provides.

The splendid blooming meadows of summer are fulfilling their reproductive imperative now as they mature and disperse the fruits and seeds that resulted from pollination. Plants can’t walk or actively fly, so to disperse from the mother plant, seeds need to catch a ride. Wild gourds bob down flooding arroyos, thistledown floats on the wind, and red barberry fruits hope to catch the eye of a hungry song bird.

Certainly the most annoying means of dispersal is employed by seeds that stick in fur and socks. Some like cheatgrass are driven home by sharp barbed seeds that poke and hold like the porcupine’s quill. Others form evil pointy burrs, like those of puncturevine, that can flatten a bicycle tire. And then there is burdock. This European weed infests moister disturbed sites in Utah. Its burrs cling tightly to hair and clothing.

Sixty years ago, the Swiss engineer, George de Mestral, became intrigued by the seed heads of cockleburrs and burdocks. They had entangled his dog’s fur and stuck to his pant legs during a montane hunt. How did those burrs cling so steadfastly? Aided by a hand lens, you can see what de Mestral saw: ranks of hook-tipped bristles that snag clothing and fur. Burdocks inspired de Mestral’s invention of Velcro, whose patented nylon bristles are hooked over just like burdock’s and latch on just the same. When next you are beset by burdock burrs, inspect one closely and admire the inventiveness of nature. Then please terminate its dispersal by placing it where the seeds of this weed can’t germinate and grow!

This is Linda Kervin for Bridgerland Audubon Society.
Credits:

East Coast news reports have been abuzz about this summer’s synchronized emergence of the periodic cicada, last seen in 1996 when their parental generation flew. The incessant loud buzzing of these 17 year cicadas has been the dominant sound of mid-Atlantic forests and towns for some weeks now.

The Great Basin also has cicadas. Our two species from the genus Platypedia produce a more subdued mating call. They use crepitation, from the Latin for a crackling sound. Our crepitating cicadas have received scant research attention; even their means of sound production remains uncertain. Their call consists of a trill of accelerating clicks.

You can see an audio spectrograph of their clicking call on our Wild About Utah website. The wings of crepitating cicadas visibly clap to the tempo, leading some to believe that the sound is that of slapping wings. More likely, the snapping sound is generated by the bending of a wing vein or other semi-rigid surface in the manner of a metal dog training clicker. Listen to the similarity.

As with cicadas everywhere, our crepitating cicadas spend years underground as slow growing, wingless immatures called nymphs. Cicada nymphs feed in a manner similar to their smaller kin the aphids, white flies and scales, piercing the roots of trees and shrubs to suck their sweet sap. When and where adult cicadas are abundant, you can see scattered cast brittle skins from which the adults emerged. Tunneling by cicada nymphs has been shown to alter the morphology of Great Basin soils, but it is their collective daytime clicking that grabs your attention.

En masse, they sound like an orchestra of castanets. At sunset, as if on cue, they all become quiet for the night. After hearing our crepitating cicadas clicking all day long, that evening silence is profound.