Eating the “humble crow”! Not literally- I hear they are rather tough and stringy. In my last reading titled “Wren Love”, I was confused by a flock of birds acting much like canyon wrens, but exhibiting a most unusual communal behavior. A later visit to the same ice covered cliff, only this time with optics, revealed them to be the gray crown rosy finch. I apologize for my carelessness!

As recompense, I must give this beautiful finch its due and to repay you, dear listener!

I first met this beauty above 13,000’ on my way to Mt. Whitney’s summit in the Sierra Nevada range. It was a pleasant surprise as I wasn’t aware this species existed until locating it in a bird guide a few weeks later. I was within ten feet and they showed little concern with my proximity. Many years later I met them again during a Christmas bird count high on a ridge in the Bear River Range of N. Utah. A bird of the mountains, I surmised.

This winter our local Audubon chapter donated seed for a USU research project on its cousin, the black rosy finch, long considered a variation of the same species until genetic studies proved otherwise. The gray crowns far out-number the black who have a highly restricted range. The black rosy-finch is one of the least-understood birds in North America. Its reproduction, demography, population status, survival rates, distribution, and migratory tendencies, all deserve further study. These data gaps limit not only our understanding of the species, but also the ability to conserve and manage this gorgeous bird.

Researchers have conducted serious studies less than once per decade since 1925, when the first nests were recorded. Between then and 2002, three researchers had documented only 23 nests. This least-known, least-accessible bird of remote high country, may prove a bellwether for a retreating alpine ecosystem. Its mountaintop habitats are especially vulnerable to the effects of a warming climate. You may join this study by googling the “Wild Utah black rosy finch” project.

Like the Black Rosy, the Gray-crowned Rosy-Finches nest in crevices on cliffs and talus among glaciers and snowfields above timberline, mostly in Canada and Alaska. They glean wind-transported insects on snowfields and meadows, particularly at the edge of snow patches. Later in the season they capture insects from vegetation including flying insects, as well as continuing to feed on seeds. Winter foods are mostly seeds taken from the ground, from stalks protruding through the snow, and at high elevation bird feeders. In the non-breeding season, they sometimes occur in large, mixed flocks composed of other rosy-finch species, namely black and brown capped.

If you are fortunate enough to encounter this remarkable beauty, you will have a good day indeed, and if a black rosy finch, please report it to Janice Gardner at (801) eight-two-one 8569.

This is Jack Greene for Bridgerland Audubon, and I’m Wild about Utah! 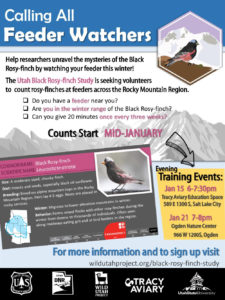