Within Zion national park, there is a small, little known creature named the ringtail. It is related to the raccoon and is completely nocturnal. With big eyes, bigger ears, and a black and white striped tail, they seem like a fairy tale critter. However, they are very real, albeit elusive and extremely smart. They are about the size of a house cat and spend their time hunting for mice, lizards, bird eggs, and insects while also foraging for berries and seeds. They are quite adaptable mammals, changing their diet to suit their surroundings. They can be found throughout the southwest and western coastal states from Oregon to Texas, in all sorts of habitats. However, they are rarely seen, so their presence in the desert of southern Utah usually goes unnoticed. Many residents of southern Utah don’t even know that ringtails exist, let alone live in their back yard.

A relatively large population of ringtails exist in Zion National Park, one of the most heavily traveled national parks in the US. Last year, alone, over 3.6 million people visited the park. Those tourists and visitors often eat packaged and pre-cooked foods while in the park, disposing of their trash in proper receptacles or, rather irresponsibly, along trails and campgrounds. This creates ample opportunities for ringtails to gain access to human food, such as trashcans, and may encourage them to forage for food around campsites and visitor lodging. This behavior is a problem for the guests and employees of Zion National Park, but it is also extremely problematic for the ringtails in this area.

The consumption of human foods and trash items are creating a significant shift in the composition of the diets of ringtails in this park. Researchers at Utah State University collected scats from ringtails in the park to analyze what they were eating. While the scats collected far from human buildings and activity showed the diet that is expected for wild ringtails in this area (e.g. insects, plant material, and some small rodent remains), the scats collected around and inside human buildings told a much more disconcerting story. There was trash and non-digestible food items present in over a third of the scats collected. These items perhaps could be due to the wrappings of human food, such as napkins, or they could be a byproduct of trying to gain access to the food, such as eating foil candy bar wrappers. A lot of human food is accessed through improperly sealed trash containers, poor food storage in campsites and cabins, and potentially hand feeding, all of which put the ringtails at risk for dietary problems, behavioral problems, and possibly death.

The ringtails are also coming towards buildings in the communities around Zion National Park, such as Springdale and Rockville, to seek easy shelter in the colder months, something that is not necessary for their survival. Properly sealing homes, particularly attics, in the areas where ringtails occur will prevent the ringtails from entering the living spaces of humans, and gaining access to food items dangerous to them. It will also prevent the homeowner from dealing with the aftermath of having a ringtail take up residence in an attic or crawlspace. Any hole larger than 2″ in diameter is enough to allow an adult male ringtail to enter. Surveying a house’s foundations and siding each fall to identify any such holes, and fill them in, can go a long way toward preventing ringtails from entering a home; helping ringtails practice healthy, wild behavior.

Ringtails are a certainly a wildlife sighting to remember, but make sure you only see them on their terms. Always properly store, prepare, and dispose of food items when in areas with wildlife. It protects you and it protects them, making sure your experience in natural areas remains a positive one.

One of the first things observers notice about the kit fox is its tiny size. Weighing in at a mere four pounds or so, Vulpes macrotis is among the smallest canids on the planet.

Often mistaken for swift foxes, kit foxes are a distinct species that sport larger ears and a leaner, more angular appearance. The small mammal has a long, black-tipped bushy tail and a yellowish-gray coat tinged with rusty orange.

Listed as a sensitive species in Utah, the carnivores live primarily in the state’s arid, western regions, where they reside in family dens and hunt for smaller mammals such as field mice and jackrabbits, as well as insects, birds, amphibians and fish.

But the diminutive hunter is susceptible to predation by a host of larger beasts, including coyotes, bobcats and golden eagles, says USU alum and wildlife biologist Bryan Kluever.

“With small size comes disadvantages; however, the advantage is increased agility and mobility,” he says.

Kit foxes have little difficulty leaping over sagebrush and rabbitbrush that towers over them and provides a welcome refuge from hungry predators. Given a choice, the foxes prefer to stay in open areas, where they can put their sense of sight to full use. Their vulnerability to larger members of the food chain partially explains the animal’s nocturnal habits.

“The life of a kit fox is ruled by the night,” Kluever says. “They are rarely active during the day and, when they are, this activity is limited to near dawn and dusk. This behavior is likely a function of eluding their enemies and avoiding harsh desert temperatures, especially in summer.”

One of the kit foxes’ most distinctive traits is its insatiable curiosity.

“If one word had to be used to describe the kit fox, it would be inquisitive,” says Kluever, who extensively studied the creatures at the Army’s Dugway Proving Ground. “Most canids cannot be captured with cage traps but kit foxes are one of the exceptions. When we released them after capture, they often began to walk toward us, rather than running away.”

Thanks to USU’s Quinney College of Natural Resources for supporting research and development of this Wild About Utah topic. 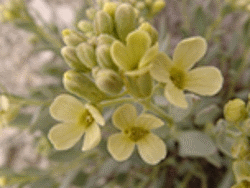 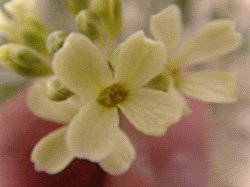 Tucked into isolated pockets of the Uintah Basin’s arid wildlands is the best little plant you’ve never heard of. Known to exist only in Duchesne and Uintah Counties, Shrubby-reed Mustard seems to occupy only the semi-barren “islands” of white shale in areas of the Green River Formation’s Evacuation Creek region. The endangered plant features thick, almost succulent, blue-green leaves and small yellow flowers.

“The habitat of Shrubby-reed Mustard is visually striking,” says USU alum Matt Lewis, a botanist with the Bureau of Land Management in Vernal, Utah. “It grows in very shallow, fine-textured soils and shale fragments that form narrow bands in the desert shrub community.”

Among the first plants to flower in spring, the perennial herb is visited by large number of insects, including many native bee species that forage for pollen. Scientists believe these bees may be critical in the plant’s reproduction and survival.

Lewis says the plant, also known as Toad-Flax Cress and Uintah Basin Waxfruit, offers an understated beauty to the stark landscape. With a shrub-like form and multiple stems, Shrubby-reed Mustard grows to about 20 centimeters in height. Its leaves, which feel almost like leather, change to a bright purple in the fall.

The plant is also enticingly fragrant, Lewis says. “Its scent reminds me of roses mixed with apples and pears.”

Despite its fragile status, Shrubby-reed Mustard is a long-lived plant. USU ecologist Geno Schupp says some individual plants may be one hundred years old.

The elusive species has outlived scientists’ attempts to classify it and has undergone several taxonomic changes. It currently boasts the scientific name Hesperidanthus suffrutescens, placing it solidly in the mustard family.

Lewis knows of no history of Shrubby-reed Mustard as a culinary or medicinal herb, though documented reports of such uses for mustard plants date back to ancient times. The plant appears to provide welcome forage for some four-legged creatures, he says, as he recently witnessed plants that had been grazed completely and ripped from the ground.

“Whether that was due to livestock or native ungulates, I’m not sure.”

Within the Intermountain West’s vast sagebrush ocean lives a tiny, furry creature that spends the majority of its time in or near a burrow of its own making. The Pygmy Rabbit, North America’s smallest member of the rabbit family, weighs about a pound and is about the size of a grapefruit.

The pint-sized mammal makes its home in sagebrush-studded areas in northern and western Utah, says Utah State University alum and National Park Service ecologist Tammy Wilson. Sagebrush provides food and cover for the rabbit and, in winter, provides 99 percent of its diet. The rabbit’s activity pattern is described as “crepuscular,” meaning that the animal is primarily active at dawn and dusk.

In addition to its petite size, the pygmy rabbit can be distinguished from cottontail rabbits and jackrabbits by its coloring and its ears. The pygmy lacks white fur on its tail; has smaller, very hairy, white-margined ears and a narrower face. Its fur ranges in color from salt and pepper gray on its back, to reddish-brown on its feet.

The Pygmy rabbit is a great example of ‘cryptic’ coloration; that is, a coloration that conceals or disguises the animal’s shape. The animal’s mottled coloring makes it virtually invisible in the shade of a sagebrush plant, which helps it to elude predators.

Pygmy rabbits produce up to three litters during a breeding season and the average litter size is six. The animals need to produce large families as they’re popular prey for a host of predators, including weasels, coyotes, badgers, bobcats, raptors, owls, badgers, foxes, along with rats, ravens and crows. Not surprisingly, the elusive animal is never far from the protection of thick brush and a maze-like network of tunnels.

Known for their burrowing skills, Pygmy rabbits prefer loamy soils where they dig networks of tunnels with several entrances. In winter, the animals build tunnels in snow that connect to large cavities created by the weight of the snow on tall shrubs. The rabbits build the snow tunnels on top of the burrows they’ve dug in the ground.

For example, on a zero-degree day in Utah’s northernmost Rich County, a pygmy rabbit in a snow tunnel enjoys a relatively balmy 32 degrees.

While ravenous predators are a hazard for pygmy rabbits, an even greater threat is shrinking habitat. As Utah’s sagelands give way to development, the tiny animal will have less food and less area for its cozy abode.

Thanks to USU’s Quinney College of Natural Resources for supporting research and development of this Wild About Utah topic.