I vividly remember the first time I saw one – a small winged creature whirring from flower to flower in the evening light, its long tongue dipping for nectar within tube-shaped blooms. I was mesmerized, and struggled for a closer look.

If you’re thinking that I must have seen a hummingbird, you would be making a very common mistake. A mistake, in fact, that has given this critter one of its many nicknames. The winged wonder I saw that summer night was a sphinx moth, also called a hummingbird or hawk moth because of their large size and bird-like characteristics.

In all stages of their life, these insects are large. Caterpillars grow to a robust 4 inches in length and adult wingspans can measure more than 5 inches. Sphinx moths are also some of the fastest insects on earth and have been clocked flying at over 30 miles per hour. Their size, speed, and flying ability reflect those of the hummingbird so closely that they are commonly misidentified.

Sphinx moths are a beloved sight in many Utah gardens. However, they also hold a bit of a devious surprise. The larvae, or caterpillar, of one common species of sphinx moth are well known by vegetable gardeners. They are large and bright green with a distinctive horn near their hind end. Like the adults, these larvae go by many names, the most common being the tomato hornworm. Hornworm caterpillars, unlike their adult counterparts, are not beloved by gardeners. They are voracious beasts with the ability to strip the vegetation off a tomato or pepper plant in one day.

Aside from our garden plants, young hornworms of other species feed on a variety of vegetation including willow, poplar and cottonwood trees. Adult moths rely on a host of flowers such as columbine, honeysuckle, larkspur and evening primrose. Here in Utah you might come across one of a handful of different species in the sphinx moth family including the five-spotted hawk moth and the white-lined sphinx. Look for them in the late summer evenings as daylight begins to fade. But be sure to look twice to avoid mistaking them for something they’re not.

And the next time you find a hornworm on your tomatoes, maybe just relocate the little bugger so that you can enjoy it once metamorphosis changes the beast into a beauty.

For more information and pictures of our native sphinx moths, visit our website at www.wildaboututah.org. Thank you to Rocky Mountain Power Foundation for supporting the research and development of this Wild About Utah topic.

For the Stokes Nature Center and Wild About Utah, this is Andrea Liberatore.
Credits: 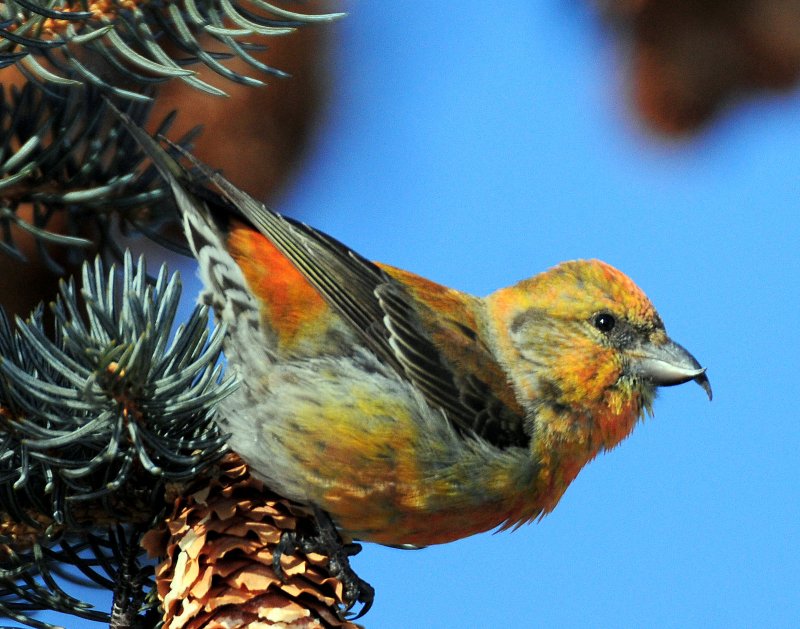 Red Crossbill (female)
Copyright © 2009 Paul Higgins
More photos at pbase.com/phiggins/Few among us would choose to eat a steak with a spoon or soup with a fork. And in the world of birds, it’s the same story – you need the right tool for the right job – and you can tell a lot about a bird by paying attention to its beak.Andrea Explains Fitting the Bill

Physiologically, beaks are a specialized extension of the skull and are coated in keratin – the same material that makes up our fingernails. And like our fingernails, the cutting edges of the beak can be re-grown as they are worn down by use.

Birds use beaks for a multitude of tasks including preening, weaving nests, and defending territories. However it is the task of eating that seems to dictate beak shape and size. Envision the hummingbird, for instance. Its long, thin beak – and corresponding tongue – is designed to reach deep into flowers to collect the nectar within. A hummingbird beak would not work for a woodpecker or a great horned owl. Likewise an eagle’s beak needs to be sharp and strong for tearing flesh, and wouldn’t suit the lifestyle of an ibis or a sparrow.

One Utah native, the aptly-named red crossbill, has one of the most unique beaks around. When closed, its curved top and bottom bills overlap crossways in what looks like an awkward and uncomfortable pose.

French naturalist Count Buffon, first laid eyes on a crossbill in the mid-1700’s. The bird was collected in the Americas, then shipped abroad for examination. Without observing the crossbill in its natural habitat, Buffon labeled its beak “an error and defect of nature, and a useless deformity.” More than 50 years later, Scottish-American naturalist Alexander Wilson observed a crossbill in the wild and determined that its beak ‘deformity’ was in reality a magnificently adapted tool. The crossbill’s diet consists mainly of the seeds of conifer trees, and it turns out that the bird’s curiously crossed beak is perfectly adapted to prying apart the scales of pinecones to get at the seeds within.

Members of the finch family, these birds are often seen in flocks and occasionally visit backyard feeders. They are easily identified by their unique beaks, which serve as a reminder that the right tool for the right job can sometimes seem a bit unconventional.

For more information and photographs of crossbills, visit our website at www.wildaboututah.org. Thank you to Rocky Mountain Power Foundation for supporting the research and development of this Wild About Utah topic.

The most popular school program that the Stokes Nature Center offers is a geology lesson for second grade. I’m not sure what happens between second grade and adulthood to make our general perception of geology go from exciting to boring, but you would be amazed at how excited second graders get over rocks, and especially, over fossils.

Fossils are really quite rare – a very specific set of conditions have to be met in order to create one. Most living things decompose fairly rapidly upon death, leaving no trace of their existence behind. In order to create a fossil, this process of decomposition needs to be halted fairly rapidly, which typically means that the body is quickly covered by some kind of sediment – like sand, or soil or mud. For this reason, most fossils are found embedded in sedimentary rock. If pressure and moisture levels are just right, over the course of millions of years the organism’s molecules will slowly be replaced by minerals from the surrounding sediments – eventually turning bone into stone.

Only somewhere around one in a billion bones will make it through this process. From there the fossil has to remain intact and identifiable through eons of tectonic plate movement, earthquakes, and mountain uplift. Then, in order to be found it has to be located near enough to the earth’s surface, and in such a place where a human might come across it. Some geologists estimate that only 1 in 10,000 species that have ever lived have made it into the known fossil record, which makes me wonder what discoveries still await us.

Fortunately for us, prehistoric Utah was a place where fossilization happened with some regularity, as evidenced by places like Dinosaur National Monument and the Escalante Petrified Forest. Did you know that Utah has a state fossil? That distinction goes to the allosaurus, a predatory dinosaur that thrived during the Late Jurassic period. Numerous skeletons found in east-central Utah range in size from 10 – 40 feet in length, meaning this fearsome creature may have rivaled it’s more famous cousin Tyrannosaurus Rex for top predator status.

With such a rich fossil history, it’s not out of the question that you might stumble onto something truly amazing during a routine hike. Can you keep your find? Well, that depends on two things: the type of fossil, and whose land it was found on. On public lands in Utah, fossils of vertebrates cannot be collected, while fossils of invertebrates and plants can be. Private land owners have full rights to the fossils found on their property. With all fossils, it’s a great idea to report your find to the US Geological Survey so that your discovery can be documented for public or scientific research, display or education.

Fossil creation is an incredible phenomenon that has allowed us to glimpse the earth’s history in ways that would otherwise be completely hidden. Thanks to fossils, we can envision a prehistoric landscape filled with giant ferns, enormous dragonflies, long-necked allosauruses, and flying pterodactyls. Without the evidence in the fossil record, I doubt that even the most imaginative person among us could have envisioned such an amazing array of life.

For the Stokes Nature Center and Wild About Utah, this is Andrea Liberatore.

McCalla, Carole and Eldredge, Sandy (2009) What should you do if you find a fossil? Utah Geological Survey. Accessible online at: http://geology.utah.gov/surveynotes/gladasked
/gladfossil_collecting.htm

Trefil, James (1996) 101 Things You Don’t Know About Science and Nobody Else Does Either. Houghton Mifflin Company: New York, NY, http://www.amazon.com/Things-Dont-About-Science-Either/dp/0395877407

Spider silk has long been of interest to scientists and engineers for its incredible strength. Silk can be, by weight, a stronger fiber than steel or Kevlar. But new research has discovered that the strength of the individual fibers does not explain the durability of a web, which can remain functional after sustaining extreme stress. The web’s overall design adds to silk’s durability to create a truly functional product.

Spiders utilize silk for many different reasons – transportation, lining burrows, protecting and securing egg cases, and of course for catching prey. Amazingly, an individual spider has the ability to manufacture several different types of silk, which are used for different purposes. In a typical orb-style web there are at least three kinds of silk at work. One is strong and dry, making up the ‘spokes’ of the web. These are the strands upon which the spider itself moves around, so as not to get stuck in its own trap. The strands which create the characteristic spiral pattern are actually made of two types of silk – one is a fine, stretchy fiber, and the other a sticky, glue-like substance. Together, these two silks make up the part of the web responsible for snaring prey.

Another important property of silk is that when stretched the fiber stiffens. As more pressure is applied, the properties of the silk change, allowing it to become stretchy and flexible. If still more pressure is added, the silk stiffens again, until finally it breaks. Originally, this stiff-stretchy-stiff response to stress was viewed as a weakness, but when analyzed as part of an interconnected web, that’s not the case. A team of scientists from MIT noted that webs could be subjected to a lot of force with only minimal damage. Whether the force was localized – for example while ensnaring a large insect – or more widespread over the entire surface – such as pressure from strong winds – the damage incurred by the web was minimal. Only the individual strands that endure the most pressure break, while others stiffen, flex, and remain intact.

Localized damage allows the spider to more often than not simply repair a web instead of abandoning it and starting over. Creating silk and weaving a web is a costly process for a spider – it takes up a lot of the arachnid’s energy. The ability to simply patch the broken parts is a more efficient strategy which requires less energy expenditure and fewer materials than weaving a new web.

Figuring out how to mimic this response to stress on a material could be infinitely useful in the human world. Imagine a skyscraper in an earthquake that fails in one small place where the forces are strongest – not in its entirety as is currently the case. That same earthquake-damaged building might also need only minimal repairs, saving time, money, and materials. Oh the lessons we could learn from one of nature’s smallest creatures…

Thank you to the Rocky Mountain Power Foundation for supporting the research and development of this Wild About Utah topic. For the Stokes Nature Center and Wild About Utah, this is Andrea Liberatore.

For the Stokes Nature Center and Wild About Utah, this is Andrea Liberatore.