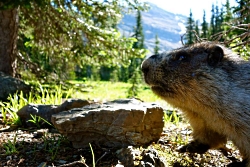 If you have explored the mountains of Utah, you’ve inevitably heard the iconic high-pitched chirp associated with Utah’s Yellow-Bellied Marmot.

Sporting chubby cheeks, large front teeth, a reddish-brown tail that spins like a helicopter rotor when fleeing, a greyish-brown back, white patch of fur between the eyes, and a yellow-orange belly, these sun-loving, flower-chewing mammals exude a Buddhist-type nature, especially when compared to their frantic neighbors, the pika.

Yellow-bellied marmots belong to the mammalian order Rodentia, in the squirrel family Scirudae. This family includes all species of prairie dog, chipmunk, and the woodchuck. Marmots fall under the genus “marmota.” The scientific name of yellow-bellied marmots is “Marmota flaviventris.” Although the origin of the term marmota is not certain, one accepted interpretation stems from a similar Latin word meaning “mountain mouse.” Flaviventris means “yellow belly” in Latin.

There are 15 species of marmot worldwide, all in the northern hemisphere. Most live in mountainous areas such as the Alpine marmot found only in Europe, though some live in rough grasslands. Although commonly believed to be in the same genus, the prairie dog is not classified in the genus Marmota, but in the related genus Cynomys.

When alarmed, yellow-bellied marmots emit a shrill whistle which earned them the nickname “whistle pigs,” by early settlers. Sometimes they make a “chucking” sound, which could explain another nickname, “rock chuck.” Additional monikers for marmots include “whistlers”, “mountain marmots”, and “snow pigs.”

Yellow-bellied marmots live at average elevations of 6,000-13,000 feet throughout western North America. They are often found in highland meadows and steppes, and almost always near rocks. Burrows are usually constructed in areas with plentiful plants which comprise the marmot’s main diet: herbaceous grasses and forbs, flowers, legumes, grains, fruits, and insects. Marmots spend the summer months sunning on warm rocks and fattening up in preparation for winter hibernation which can last up to 8 months.Thus, they are especially plump in the fall, right before hibernation, and reach weights of around 8-11 pounds. They may also estivate in June in response to dry conditions and a lack of green vegetation, only to reappear later in the summer when food is once again plentiful.

The typical social structure of yellow-bellied marmots includes a single male with a range of one up to four females. Males are territorial and aggressively protect their harem from other male marmots and smaller predators such as the ermine. Other predators to the yellow-bellied marmot include coyotes, foxes, badgers, bears, and eagles. Females raise their annual offspring of 3-8 jointly with other females within the harem. Baby marmots or pups are born relatively undeveloped and require large amounts of care until they emerge from the nest three weeks later. Only about half of marmot pups survive and become yearlings. If they make it through the first year, marmots may live up to 15 years of age.

Given that they spend about 80% of their life in a borrow, 60% of which is in hibernation, consider yourself lucky the next time you encounter a chubby, sun-bathing, whistling marmot!

For Utah State University Extension Sustainability, this is Roslynn Brain.