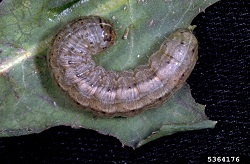 World Cup Colombian soccer player James Rodriguez isn’t the only one with a flying insect problem. For several weeks many Utahns have been coping with a bumper crop of miller moths. These dusty gray nuisances have been mobbing our lights, dive bombing our heads and plopping into our nightstand water glasses. Miller moth annoyance levels seemed highest along the Wasatch Front but other areas experienced high numbers as well.

Miller moths begin their lives as army cutworms. The larvae eat their way through the winter chomping on winter wheat, alfalfa, and many other types of crops and plants. After eating all winter, the army cutworms burrow into the ground to pupate. They emerge six weeks later with a yen for flower nectar. This sets them migrating to the alpine elevations of the Wasatch and Uinta Mountains. However, flowery trees and gardens along the Wasatch front are powerful diversions; thus our yards function as filling stations along the miller moth migration route.

Army cutworm populations soar during relatively warm winters with little snow cover. And that’s what happened this year in the south central counties of Utah. And that’s why we have so many moths now. But to keep this issue in perspective—know that the numbers we see in UT are nothing compared to the annual invasions experienced by populations on the Rocky Mountain front range. In Denver, annual spikes in vehicle crashes, therapist visits and broken light fixtures clearly coincide with the influx of miller moths.

Luckily, the moths are no more than a nuisance – they won’t eat your food or damage clothing or upholstery. And while sometimes it seems as if they are targeting your head, they really aren’t. If they are in your house, it’s because they were seeking shelter from the daytime predators by seeking a dark crack or crevice to crawl into—and then got into your house by mistake.

If you swat these unfortunate moths, they’ll get back at you. They leave a dusty gray, powdery mess. The powdery dust is really the moth’s tiny scales and is what gave the moth its name. For these scales are reminiscent of the dusty flour that covers the clothing of someone who mills grain.

For a clean resolution to the problem, veteran miller moth killers from Colorado suggest you suspend a light bulb over a bucket of soapy water. Moths will flick off the bulb into the water. At our house we catch them with a butterfly net and set them free outside. For I imagine that they will be off to the mountains as quickly as possible after that experience.

In early fall, the moths return to lower elevations to lay their eggs. Enough have died during the summer so we won’t notice them much if at all. But if next winter is also mild, we will be hosting our miller moth friends again.

Thanks to USU biologist Diane Alston for sharing her entomological expertise.

For pictures, sources and tips for living with miller moths, go to www.wildaboututah.org