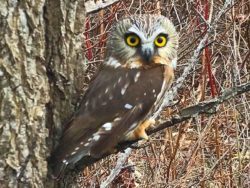 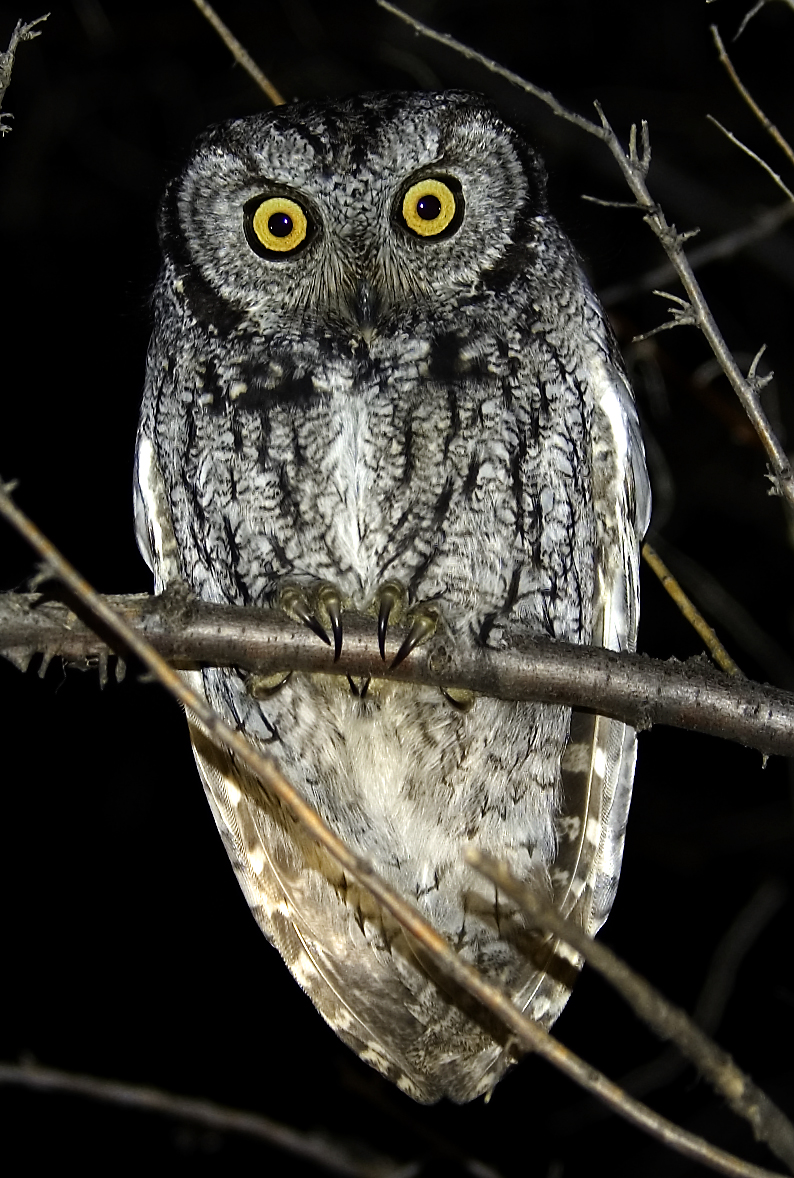 Western Screech Owl
Courtesy & Copyright Lu GiddingsThey just kept coming. Students, Auduboner’s, friends. They filled the parking lot at the mouth of Birch Canyon, an offshoot of Smithfield Canyon in N. Utah. About two dozen of us begin a march up the canyon as a full moon threatens to pop over the ridge high above us.

Tiny owls that don’t give a hoot were on the menu. Utah Division of Wildlife Resources bird survey coordinator Frank Howe leads the crew with his highly energetic dog bouncing around snow patches we crunch through. After a half-mile or so, Frank pauses by a stand of large cottonwood trees. He opens a Sibley bird app on his phone, explaining we will begin with a repertoire of songs and calls of small owls- northern saw whet, norther pygmies, and western screech owls, hoping not to awaken great horned owls, which might eat their lesser brethren.

We stand silent, awaiting an answer as he begins with the soft bouncing ping-pong ball song of the western screech owl. A few minutes pass and there it is! We are transfixed by its somewhat distant soothing call, then another deeper sound emitted by its male partner. The female slowly works her way in our direction. A few more minutes pass and she’s caught in Frank’s bright flashlight beam. Soft oohs and aahs are emitted by the viewers, most of whom have never heard, nor seen, this tiny owl being before. “This is a mated pair, beginning their courtship rituals and soon to be nesting activities.” Frank explains.

After a half hour of enjoying this fine little owl, we saunter on, hoping for a Northern saw whet or Northern pygmy. After another mile, and several toots without an answer, we begin marching back down bathed in moonlight and friendly chatter. Within a few hundred yards of the screech owl, Frank hails a halt and once again plays the saw whet recording. An immediate, barely audible answer follows. We catch a glimpse of bright owl eyes as they briefly land on a branch 30 yards away.

Frank explains both the saw whets and Northern pygmy’s will migrate to higher elevations for nesting in coniferous forests as the snow recedes. All three of these smallish owls are cavity nesters, preying mostly on small mammals, birds, and large insects. When they feel threatened, they will elongate their bodies to resemble a tree branch. The saw whet will even cover its front with a wing for added camouflage.

In a good prey year, the saw whet will kill several mice in quick succession and store them for later feeding. N. pygmy’s eat only the brains of birds they capture and the soft abdomen of large insects. They can carry prey twice their own weight. Bizarre behaviors for these little demons!

Thank you Frank for an unforgettable moonlight stroll!

Jack Greene for Bridgerland Audubon and I’m wild about the Utah Wilds and its tiny demonic owls!

Northern Pygmy Owl, Overview, All About Birds, The Cornell Lab of Ornithology, https://www.allaboutbirds.org/guide/Northern_Pygmy-Owl/overview

Western Screech Owl, Overview, All About Birds, The Cornell Lab of Ornithology, https://www.allaboutbirds.org/guide/Western_Screech-Owl/overview