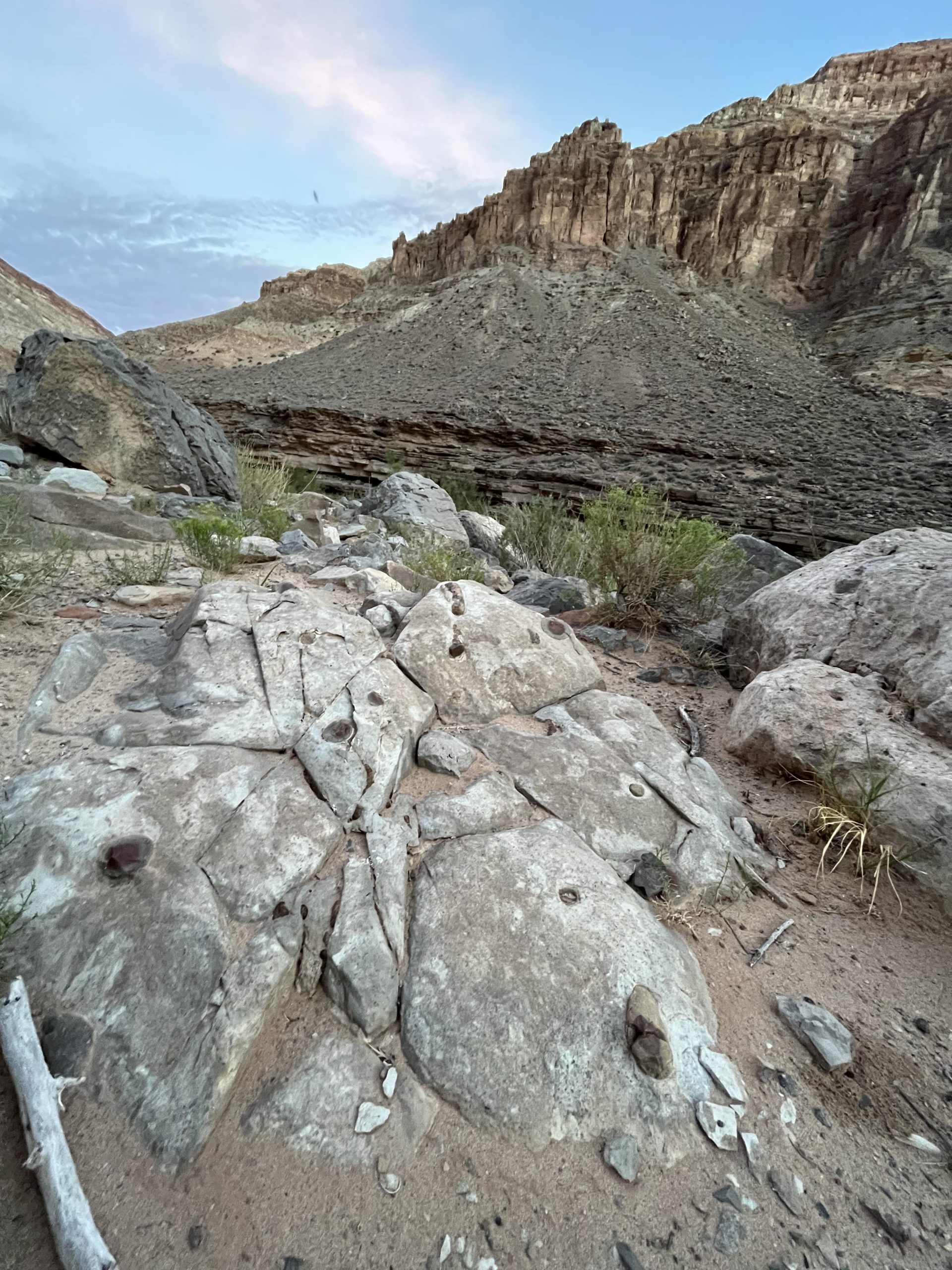 Limestone Crinoids
Courtesy & © Shannon Rhodes, PhotographerMy proofreader’s eye has often spotted “dessert” misspelled as “desert,” and to some, those two concepts couldn’t be more dissimilar. During my three days in and along a short 27-river-mile stretch of Utah’s San Juan River this month though, I marveled at the menu.

Terry Tempest Williams captures what she calls “small devotions of the desert alphabet” in her book “The Illuminated Desert.” She lists lizards languishing in desert heat, ravens and rattlesnakes amid the red rocks. A fascinating one, the Sacred Datura, blooms only at night and attracts pollinators like the hawkmoth with its showy white blossoms in the moonlight. If it is food you are after, however, avoid this poisonous temptation. Instead, try a juicy prickly pear cactus pad once you have removed the long, sharp spines. Some say it tastes like watermelon, but it tastes like a banana to me.

Along the path to San Juan Hill atop Comb Ridge, I also find ephedra, a shrub that carries out photosynthesis in its green branches, that has traditionally been said to have been used medicinally and brewed, hence the common name Mormon tea. Some, like Brock Cheney who has researched the claim that Brigham Young advocated drinking tea made from boiling the stems, argue that Young’s “composition tea” was not made from the Mormon tea plant, and once you try it, the bitterness will tell you why. Having not ever had a sip myself, I can say that the Mormon tea shrub does sprinkle brilliant green to the landscape like a garnish.

“Lie down on your backs and try to feel what is special about this place.” That’s the challenge in Joseph Cornell’s book “Sharing Nature with Children,” but it is equally rewarding to do as an adult. Lounging in the raft as another rows, I look from the sediment-laden river that reminds me of watery chocolate pudding thanks to recent rainstorms, to the great blue heron standing as a guide, flying ahead and waiting for us to catch up, just to fly ahead again. I watch with wonder as the western tanager males, songbirds with yellow bodies and black wings, heads aflame with red-orange, flutter among the salt cedars.

This oasis offers a promise of quiet away from the commotion of my city life as the desert bighorn sheep nod from the coyote willow. Even after studying the scorpions in the sand illuminated by flashlight, I stretch out and nibble at the buffet of constellations above me in the sky.

The crinoids encased in the limestone boulders along the riverbank the next morning remind me that this place was once for millions of years, actually, an ancient inland sea. I find deliciousness here in the dry heat, the muddy grit, as a guest who will return, hungry for more.